Chatham Water Watchers, in cooperation with the Town of Chatham and the Pleasant Bay Alliance, collect and test water samples in Chatham's estuaries five times per summer at biweekly intervals during July and August and once in early September. Volunteers are trained by Dr. Robert Duncanson, Director of Chatham's Department of Health and Natural Resources, to directly assess water quality by measuring water clarity, salinity, temperature and dissolved oxygen content and taking water samples at varying depths. Collected data and water samples are analyzed by the UMass School of Marine Science and Technology in Dartmouth.

The program's history began in 1994 when the Massachusetts State Executive Office of Environmental Affairs endorsed a Stage Harbor Management Plan approved by Chatham's town meeting. Chatham's plan was the first to be adopted by a Massachusetts town and became a model for other towns. Friends of Chatham Waterways (FCW) aided in the development of the Stage Harbor Plan which called for the design of a water quality monitoring program in efforts to better understand and manage wastewater from homes, businesses and storm water runoff. In 1999,FCW worked cooperatively with the town to implement this plan which became the Coastal Water Nutrient Monitoring Program.

In 2022, 38 FCW Water Watcher volunteers monitored 15 stations in Chatham's estuaries, completing the 23rd consecutive year of the Coastal Water Nutrient Monitoring Program. Since it is imperative to monitor water quality over a long period, Chatham Water Watchers will continue their work over the years ahead. Once more wastewater has begun to be treated, there will be a need for continued monitoring to assess progress against algae, low dissolved oxygen and decayed bottom sediment, all of which contribute to the loss of plant life and animal species in our waterways. 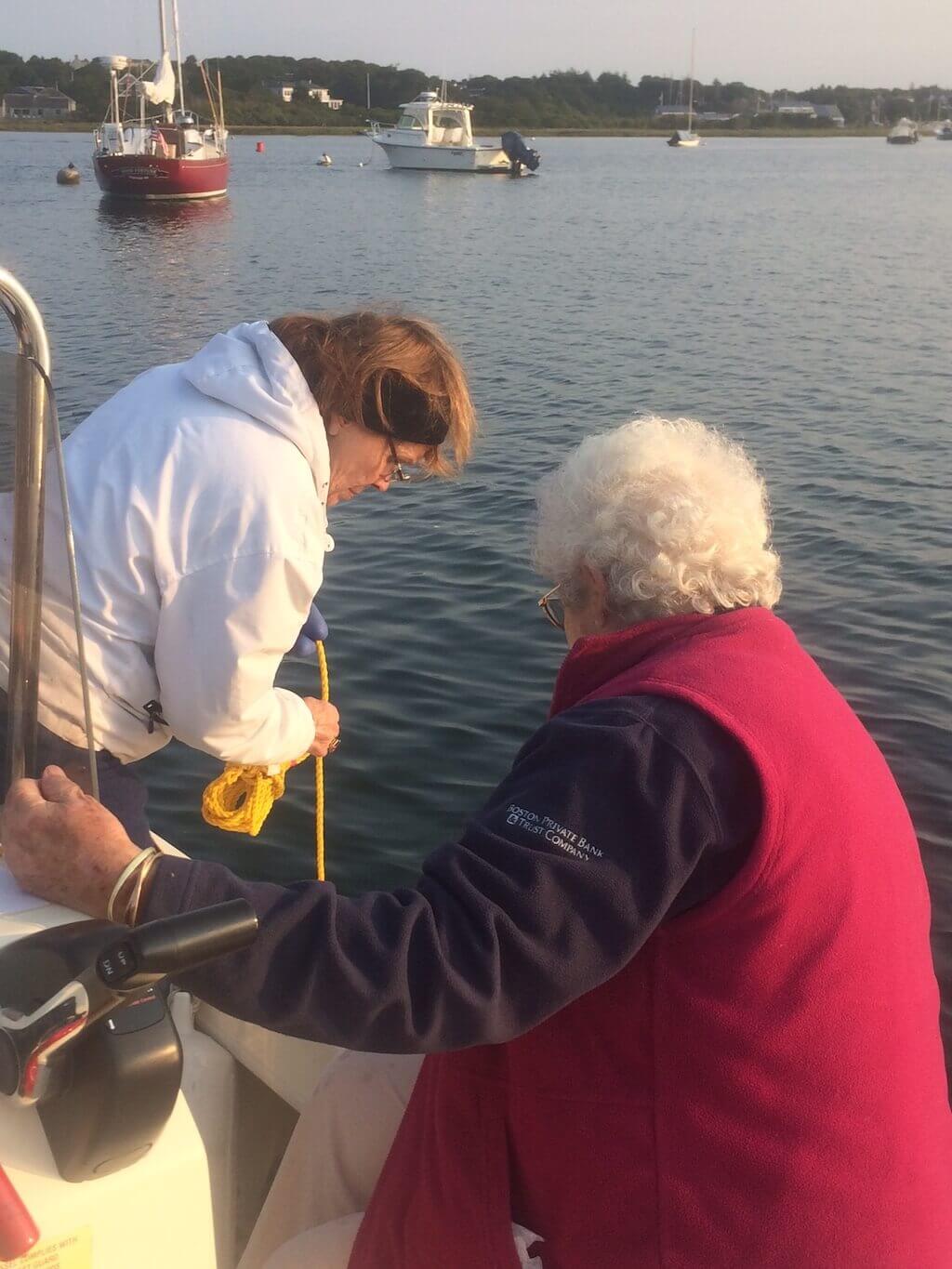 If interested in Volunteering then see our 2020 Training Video below:

From 15 sampling stations in Chatham, 38 volunteers used refractometers to measure water salinity, Secchi disks to measure water depth, Dissolved Oxygen meters to record water temperature and dissolved oxygen levels, and Niskins to collect water samples for nutrient and chlorophyll content.  Their data and water samples will be analyzed by the University of Massachusetts School of Marine Science and Technology in Dartmouth.

The Coastal Water Nutrient Monitoring Program continues to provide critical back-ground data on general water quality, conditions and trends in nitrogen loading.  This year's results, along with past data, will help determine the health of the town's estuaries and track changes as Chatham implements its waste water management plan.

Every September, Friends of Chatham Waterways (FCW) Coastsweep volunteers collect trash from 15 sites along Chatham's shoreline.  Coastsweep is run locally by FCW and is part of the Massachusetts Office of Coastal Zone Management's (CZM) annual Massachusetts Coastal Cleanup in conjunction with the Ocean Conservancy's International Coastal Cleanup
FCW provides volunteers with debris grabbers and CZM contributes trash bags and gloves for collection.  The Ocean Conservancy supplies data cards for recording site findings.  After beach cleanups, trash and data cards are dropped off at a Chatham location.  Debris is picked up by the town's Transfer Station.  Data cards are forwarded to the CZM and then sent to the Ocean Conservancy in Washington, D.C. for analysis and publication.  The data provided helps in the development of programs to reduce marine debris worldwide.
In 2022, 52 volunteers participated in Chatham's 34th annual Coastsweep cleanup, collecting approximately 250 lbs. of debris filling 25 large trash bags.  The most numereous items picked up included:  small plastic pieces (345), small foam pieces (632), food wrappers (115), plastic bottle caps (106), plastic beverage bottles (121), and plastic bags (116).  The most interesting items found were:  a backpack complete with a BB gun, shotgun shells,  a neoprene clamer's suit, a derelict canoe and Sunfish, a mooring and chain, a wooden pallet, foam cushions, and swimming paraphernalia.
Coastsweep volunteers help bring an awareness of the abundance of trash on the town's beaches and of the consequent need for people to be responsible about picking up not only their own trash but also that of others too.
Volunteer for Coastsweep

Tracking trash on the beach is important for environmental research, and you can help.  The Ocean Conservancy has created a the CleanSwell app available on both IOS and Android that allows you to report trash you have picked up on your own easily at any time and any place.

Get the Clean Swell App 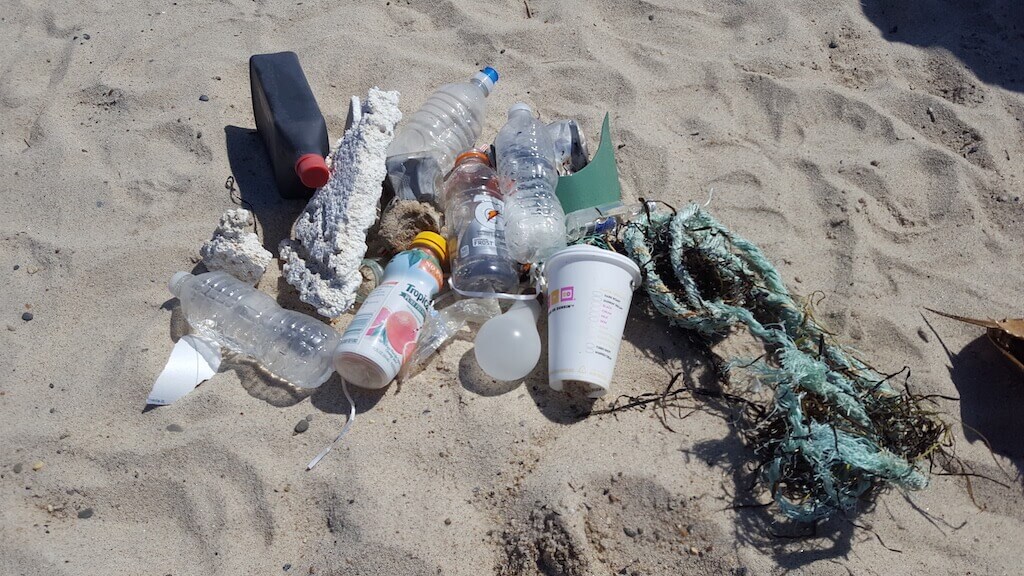 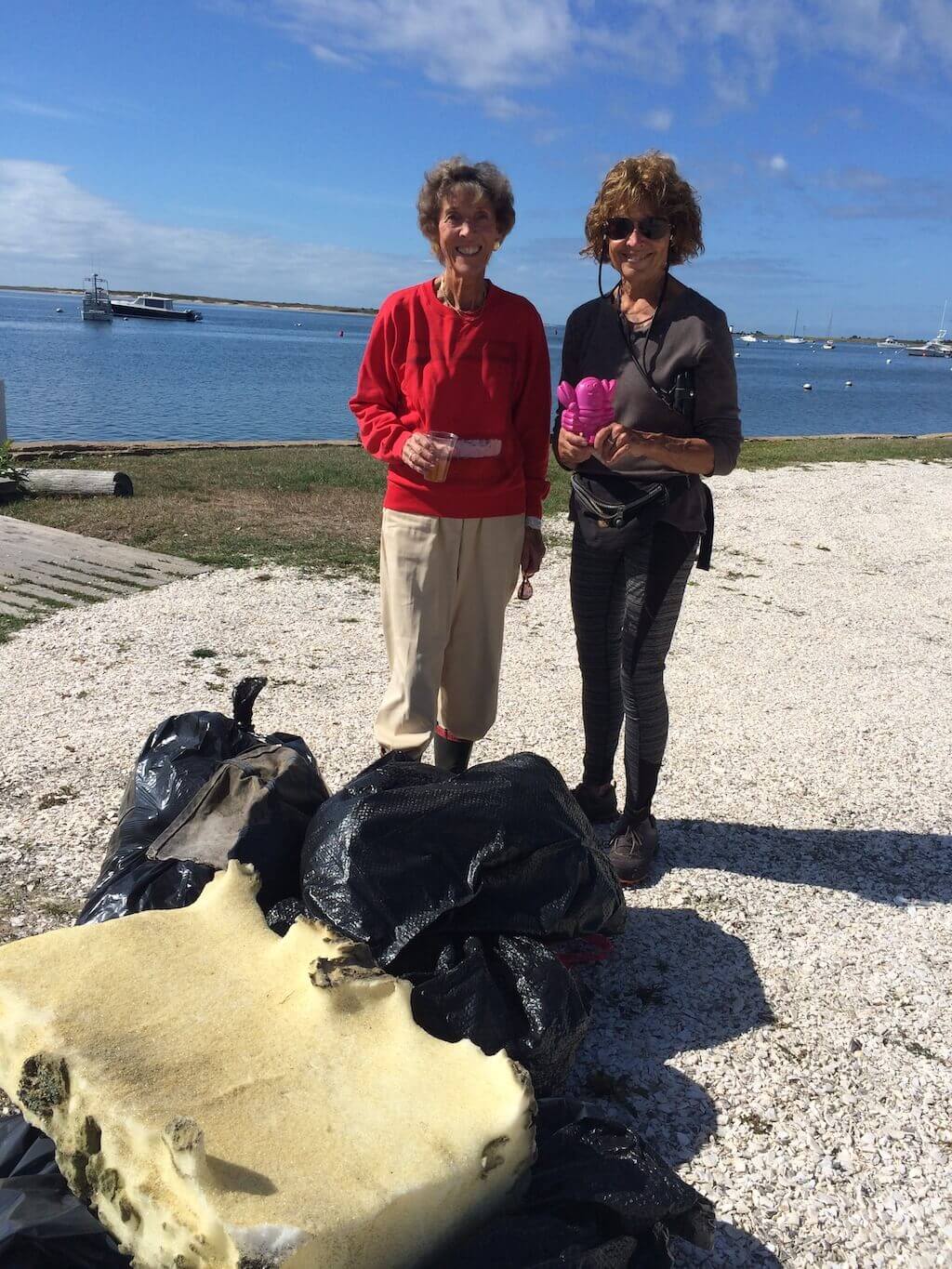 Susan Collins and Barbara Doyle surveying some of trash collected. 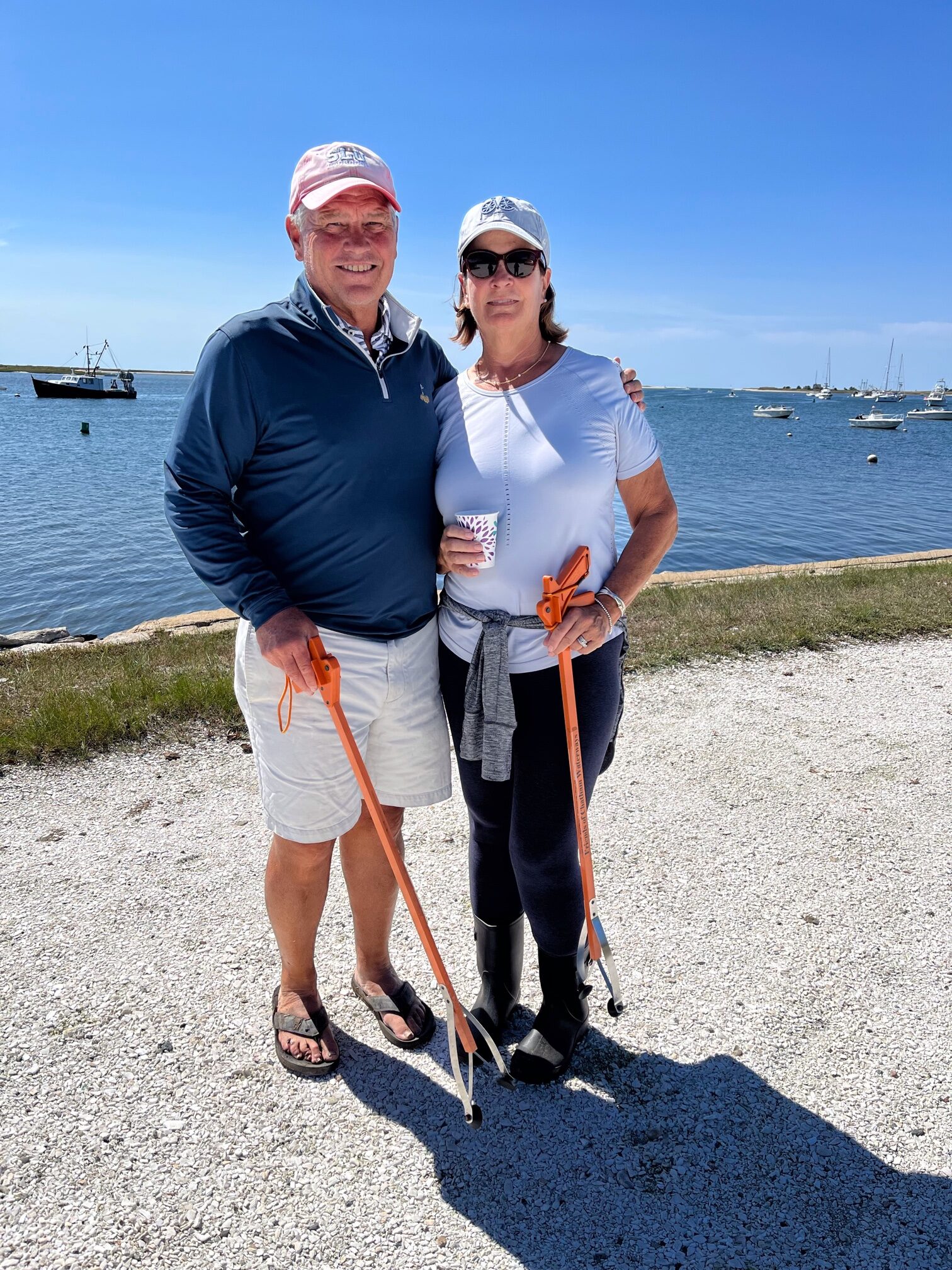 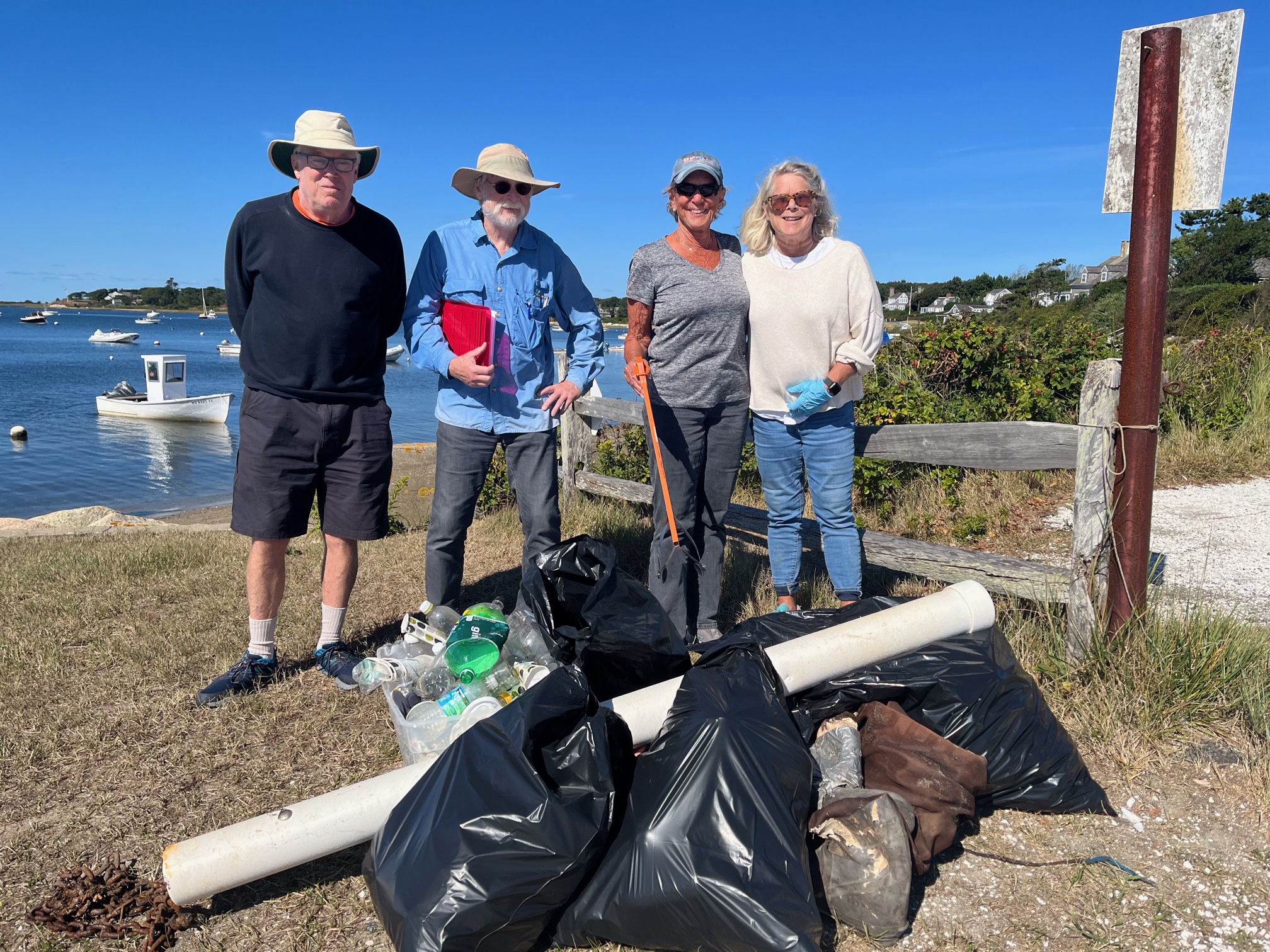